Exactly a year ago, we were in Santorini for my birthday. It was my husband’s idea that we could go on our honeymoon in July and spend my birthday in the place that I’d been mooning over for ages. Isn’t he the sweetest? 😀 And what a birthday it was! We spent the whole day walking up hills and steps and had leg aches for days after. But will we ever regret that? No! Never!

Santorini is one of the most beautiful places in the world. There are many people who say that it is overhyped, that it isn’t what it is made out to be, that it is too crowded. But I will have to respectfully disagree. Because finding myself amidst people who shared my awe of the beautiful whites and blues that surrounded us was something that filled my heart. I couldn’t at first believe it. I couldn’t believe that I was treading the same path that I had always dreamed of treading. But slowly and surely, it did sink in. 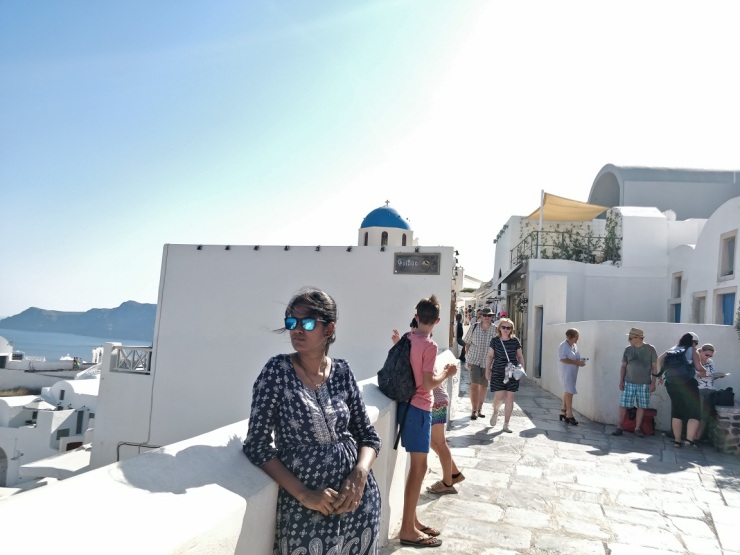 Let me start from the very beginning.

We stayed at a hotel called Santa Elena, which is just 10 minutes away from the Kamari black beach. The hotel’s owner, a pretty woman called Sofia, was sweet and accommodating, but strict when it came to certain things. Like driving, for example. Anyway, the day we landed by ferry, I fell ill and we couldn’t travel or go sightseeing anywhere. This was the day before my birthday. So it was all relaxing and trying to watch Greek TV. 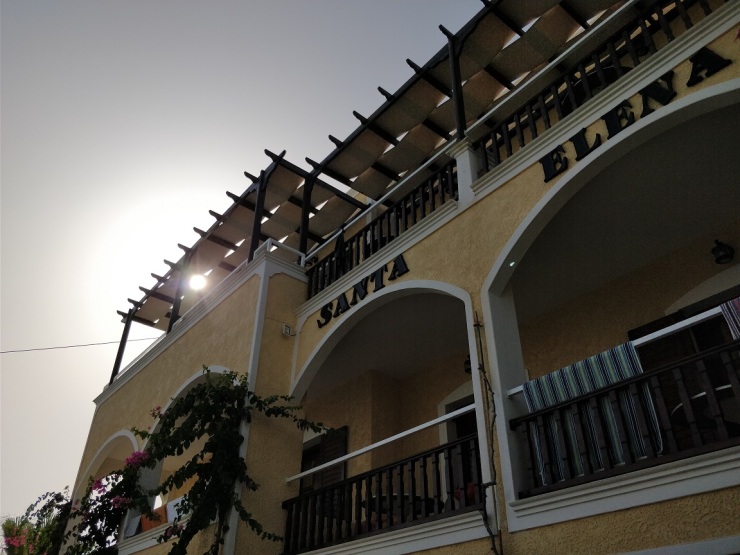 The day of my birthday dawned bright, as Greek mornings are wont to do at this time of year. We woke up early (by my standards), freshened up, and rushed to breakfast. We had booked a boat tour that would take us around all the islands that Santorini constituted, hence the rush. It would be a shame (and a waste of money :P) if we missed it.

A two-minute walk from our hotel brought us to a church beside which we stood waiting for our designated bus. An old, rusted scooter gave us company as we looked around unsurely. And when the bus did come, I was very unfairly surprised at how comfy it was.

The bus took us down to the port where we climbed the tour boat. It was quite sunny and though we had lathered on layers of sunscreen, we were still ruing not bringing caps or hats. Then again, would we get pretty pictures if we wore those contraptions? Nope! But the whole point of what I’m saying is that it was sunny and the waters around us glittered and glimmered merrily. And I was already loving every minute of it! Now, as I think back to that moment, I wish I could have stayed back there, lulled by the gentle rocking of the boat and comforted by the swishing of the water as the boat cut through it.

Our first stop was a little section of blue Aegean waters called the Palea Kameni. The boat stopped for about 20 minutes, allowing swimming enthusiasts to enjoy a lap or two in these waters. My husband and I preferred to stay aboard. We had enough to look around at so that the 20 minutes were up before we knew it. As the boar pulled away, we tried to take in as much of that nook, the water it was steeped in, the two yellow boards moored there, the hills in the background, the luxury yacht bobbing in the water some way off – EVERYTHING!

Our second stop was the Nea Kameni volcanic park. Oh what a sight it was, that upward climb! We did go halfway up, but then our legs protested too, too much for us to ignore it. Instead, we waited in a shade until we saw our group returning. Of course, in the meantime, we HAD to click pictures. With such stunning sights before us, how could we sit and just watch? We had to bottle some up so that we could bring them back with us and unstopper and savor them whenever we wanted to! Up where we sat, on the way down, back on the boat – we got some stunning pictures all along. And these are memories that I will savor for the rest of my life, as intended. 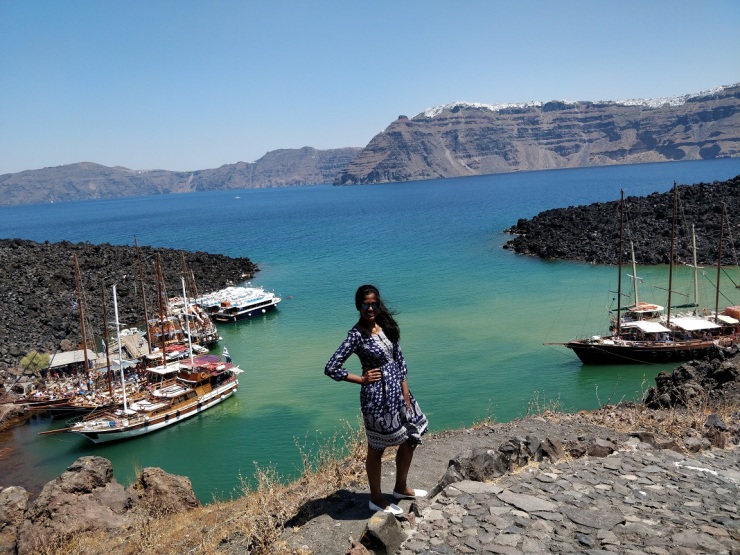 As the boat swooshed away from Nea Kameni, I felt a twinge of regret at not having climbed all the way to the top. But it was quickly overshadowed by the realization that I probably couldn’t have completed the tour if I had. Little did I know what was in store for me.

The next stop was for lunch at the foot of a fishing village, if I remember correctly. There are a slew of cafes and restaurants over there and once we had our lunch (with another Indian couple), we made our way for a walk to the last restaurant, just to get a glimpse of how it was back there. Though we’d had a not-bad lunch, we could have waited and walked a while for better. But hey! How could we tell? 😛 Before we knew it, it was time to get back to the boat because we needed to be back there to get to our last stop.

There was just a minor problem with this ‘last stop’. We had thought there would be pulleys or cable cars or something to take us to the top. But the moment we got off the boat, we were confronted with steep steps. It looked like there were not many. But if you happen to go here, then know that these ARE A LOT. Appearances are deceptive. In my dress and white bellies, I was almost dying (exaggerating A LOT). Also, I was dying to get to the top. (Now figurative. :P) Let me tell you, however, that the view on the way up is absolutely spectacular! My God, I’d climb up again and again if it meant I could lay eyes on that scene again!

We did get to the top. Obviously. And we thought, and still think that it was worth it. Worth every bit of leg ache, headache, backache – EVERY BIT! The little lanes, the expensive brands, the quaint cafes, the souvenir shops, and Atlantis Books! Oh, Atlantis Books! What a beautiful store it is! There’s so much to explore in the little narrow cobbled streets of Santorini! Dappled white and blue, this beautiful island took my heart like no other! Even now, a year later, I can feel the goosebumps as I look at the pictures or even think about it! What wouldn’t I give to just set foot there once again?

Last but not the least, the sunset! Thing is, there are a lot of people scrambling to watch the sunset. Crowds, in fact! But it didn’t lessen the intensity of the awe that rushed through me as I lay eyes on the orange glow of the setting sun. I took in my surroundings: white buildings, blue domes, pink flowers, my husband by my side, and thought, ‘Wow! I’m really here!’ That feeling that coursed through me then remains unparalleled and will remain so for the entirety of my life. 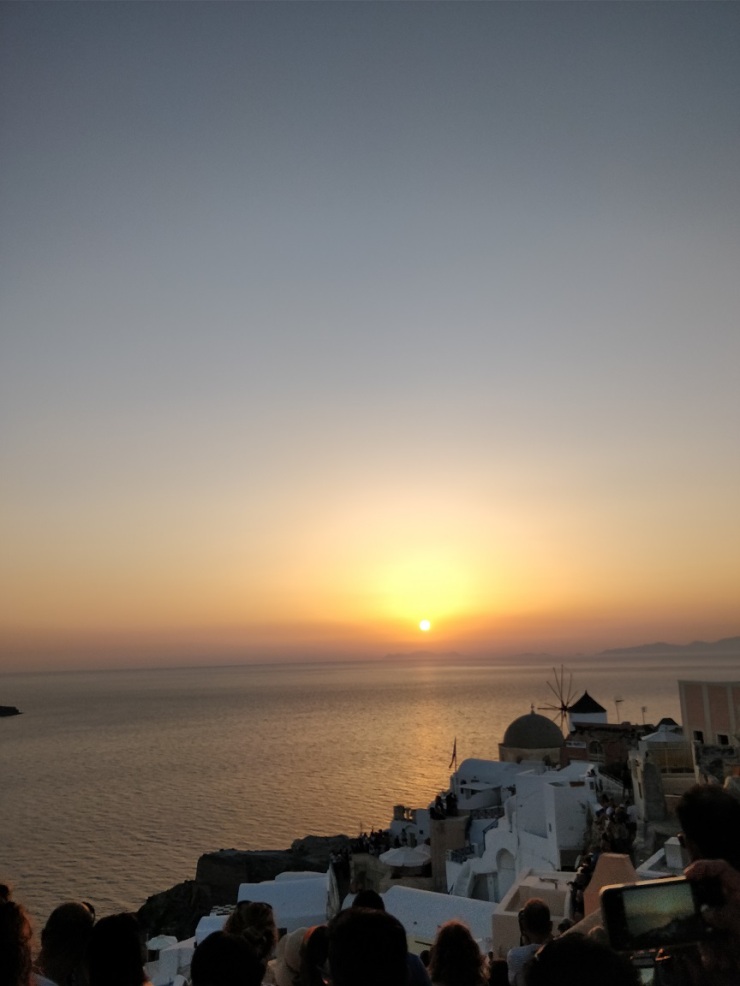 What a way to end our first day in Santorini, or any day for that matter, I thought. It is a memory we made for a lifetime, and it becomes all the more special for me because that bucket list wish of watching the sunset from Oia came true on my birthday. And for that, I am truly grateful.

A year later, as I celebrate another birthday today, I look back to the birthday I spent in Santorini with my husband and wonder, “Will anything ever top that?” And as the past glows in remembrance, the future smiles at me. It’s a cheeky smile that says, “I’ve got a lot in store for you.” And I don’t dispute it. I smile back, without a word.

Instead, I turn to my husband and softly say, “Thank you.”

2 thoughts on “This Day, Last Year – Celebrating my Birthday in Santorini!”

#QOTD : Which would you rather be: an Auror, a Victorian gentleman, or the Mother of Dragons? 😝 . . . Disclaimer: This picture was taken earlier this year when we went to watch Little Women, the movie. I was rushing to read the book before we could watch it and it was a very, very close call. 😂 . I miss going to my favorite cafes so much! It's not just the coffee or the food. It's the ambience, the feeling of being secure in my story amidst the thousands of the crowds. But we need to stay safe so that we can have more such reflective, introspective days in the future. So stay home and respect the lockdown, people! 💃 . . . Okay, so I was going through the #DramaQueenAThon hashtag and I realized there are hardly any posts from me anymore! I keep forgetting to post because I'm lazy. But I've decided I'll be lazy no more! I will be more active and post updates about my own readathon! 😌 . Let's see how this goes, although I'm internally laughing at myself. 😂 . Today's update: I finished reading 'When Breath Becomes Air' by Paul Kalanithi yesterday evening and I bawled like a baby! Still not over that book and I don't think I'll be over it for a while! I'll post my thoughts about it soon. ❤️ . Picked up Ruin and Rising last night but wasn't feeling it. So I put it aside and got on Bookstagram instead, interacting and engaging. Helped me a little. ❤️ . . . P.S. There's another variation of DramaQueenAThon coming in June. I'll announce it in a couple of days. Stay tuned. 😁 . . . . . . . #readingupdate #reading #amreading #readinginquarantine #cafereading #thosewerethedays #coffeeshopreading #readathon #readingeverywhere #readeveryday #bookstagram #bookstagramindia #bookstagrammer #instagrammer #bookdragon #bookgirl #bookobsessed #coffeeobsessed #lockdownlife #pictureoftheday #readingbooks #readingisfundamental #cafecoffeeday #littlewomen #backlistbooks #bookworm #booknerdigans #booknerd