When life kicks you in the gut and makes you reevaluate your decisions, you think about whether you are what you claim to be in the first place. At a time when my confidence in my abilities was at an all-time low, I read a book called Nikola Tesla: Imagination and the Man Who Invented the 20th Century. Written by Sean Patrick, this short eBook is a confidence-booster and a savior for those creative people who are questioning their worth. This book easily shot up on my favorite list. And I know that it will remain there for the rest of eternity.

The book states that imagination and creativity are two things that are different from ‘thinking’. Just because you think does not mean you are imaginative or creative. Creativity is chaos. It hits you at the most unexpected of times. Most of the times, you have no control over it. This is how it results in innovation – something that has given the world its ‘electric’ convenience of the 20th century. All this, thanks to the imaginative and innovative man called Nikola Tesla.

Tesla was duped and betrayed by some of the world’s most prominent personalities. He was treated unfairly, credit for his findings given to others, though it was rectified later on. Was it too little, too late? Even if it was, did Tesla stop his work? His creative genius was such that none of this stopped his onslaught. He worked till the day he died. He was unfazed, because he knew the true meaning of creativity – that it would pay off, sometime or the other.

If you are a creative person, you will know the uncertainty of sitting down and scouring for ideas. Looking for them does not guarantee that you’ll find them. On the other hand, remarkably stunning ideas can hit you at the unlikeliest of times and the unlikeliest of places. For example: in the shower, when you’re emptying your stomach, while exercising, or while driving. It isn’t that thinking won’t give you ideas. It may. Only thing is, there is no certainty about it.

Anybody who has watched Avengers: Age of Ultron will remember Vision’s lines from the end of the movie. “Humans are odd,” he says. “They think order and chaos are somehow opposites.” This is an incomplete version of the dialogue, but it holds so true when you see it in the context of creativity.

Ideas and thoughts are triggered even by the smallest of hints that resonate with us. This happened to me as I read the eBook I mentioned above. And while there’s a lot more to creativity than what’s discussed here, the essence of the trait – one whose timing is as unexpected as possible – remains ‘uncertainty’.

Here’s a picture of the excerpt from Nikola Tesla: Imagination and the Man Who Invented the 20th Century – a book that I’ve been fawning over for the entirety of this blog post! 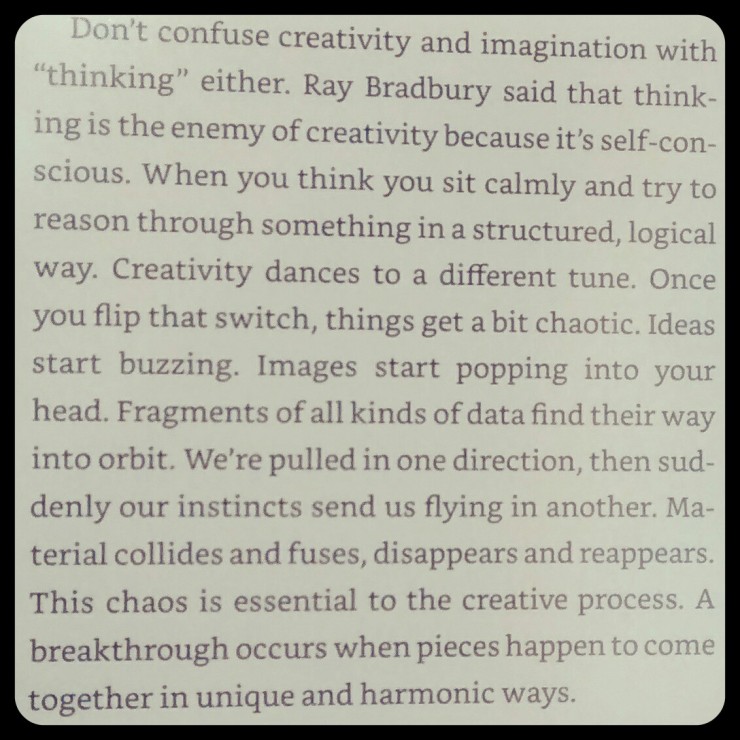 I'm craving coffee from two of my favorite franchises this Saturday. When this lockdown lifts - most importantly, when the world returns to at least a semblance of normality - you know where I'll be. 😉 . The first thing I'm going to do is march into my nearest favorite coffeeshop with a book in hand, order my favorite coffee, and sit there for as long as I can. Ah. Bliss! . . . . . . . #QOTD : What is the first thing you plan to do once everything returns to normal? . . . . . . . #quarantineandchill #dreams #oneday #coffeeshop #coffeeshops #coffee #coffeeandbooks #coffeelove #cafe #cafereading #cafes #cafecoffeeday #starbucks #starbucksindia #booklove #bookcommunity #bookstagramista #readersofinsta #readingislit #bookstagram #bookstagramindia #unitedbookstagramindia #unitedbookstagram #instapic #booksandbeans #booksandcoffee #bookobsessed #travelgram #picoftheday