The Republic Day weekend of last year saw a flurry of excited plans from all around. Two of our closest friends were celebrating their anniversary on the 25th. He decided to surprise her by getting us friends to go on a trip with them. She being too intuitive for his good, picked up that something was wrong and that Vizag was not where they were going, as against what he had led her to believe. Of course she was right. But the story of how we got there is one for another day.

For now, the beauty of Pondicherry, its beaches, and its general atmosphere is one that needs to be dwelled upon.

Pondicherry is tiny. You can finish touring it in 2 days if you rush. But we had decided to have a relaxed trip. So over 4 days, we explored the beach town from almost every corner and returned satisfied. And despite the relaxation, there was the general tiredness that comes with traveling.

Though the number does not quite match up to what Goa has, Pondicherry has quite a few beaches, the most beautiful being Auroville beach. The waves crashed on to the surprisingly slant shore with a ferocity that we didn’t quite expect. They would sneak up on us when we were posing for a picture, the shock and surprise of which I don’t think we’ll ever be able to forget.

The trees lining the shore were a blessing! You can frolic in the water, come and sit down in the shade of the trees to get yourself some respite from the sun, and then rush back in once you are charged. Oh, and the horizon! When the distant waters meet the horizon as if to lure you in there, there’s nothing more enticing or seductive!

Paradise Beach, though quite attractive on its own, isn’t relatively as attractive or compelling as the Auroville Beach. That doesn’t take away its beauty, though, for the waves slam onto the shore with equal fury. I remember thinking that I could sit there all day and watch the waves crash and blend. I chose to sit down on the sands as the rest of the gang indulged the waters, the panoramic view in front of me almost took my breath away. I’ll have to say, the Paradise Panorama is much more gorgeous than the Auroville Panorama! 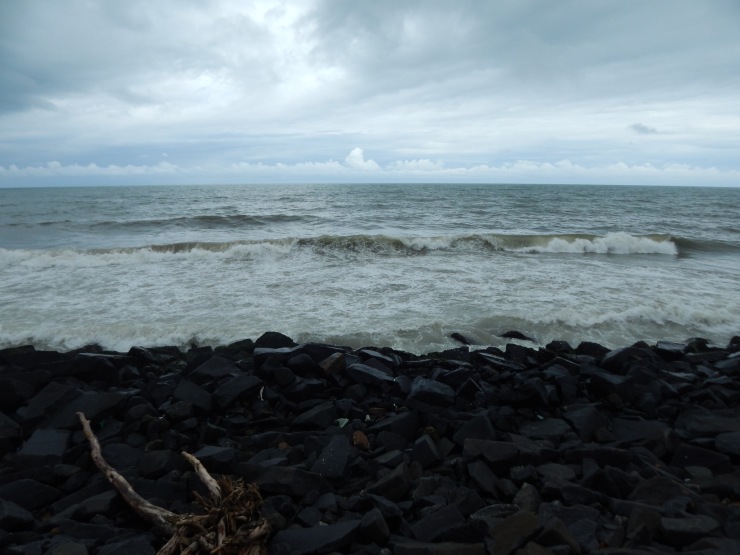 Promenade Beach, named after the Promenade hotel on that stretch, is locally known as the Rocky Beach. Kissing the waters and the rushing waves is the longest stretch of haphazard rocks I have ever seen. Romancing these rocks is the strip of elevated concrete on which you can walk as you admire the view. A road separates this concrete from the rest of Pondicherry.

Parking our vehicles on the opposite side of this road, we crossed it and climbed the two steps to the concrete. Being the “adventurous” lot, we decided to descend on to the rocks to enjoy the waves from up close. It’s the most wonderful feeling to have the waves spray themselves on you; not the drenching spray, but a gentle one: just enough to help a rain-hater like me enjoy it.

Talking of rains, there were spurts of it, though there was nothing as plan-altering as the ones we usually have in Hyderabad. I actually enjoyed them for a change because that meant we were keeping cool. The sun coming out in full force would be a different story on a whole new level.

Pondicherry has two places that you must absolutely visit for its food: Auro or Auroville Bakery, and Spice Route.

Auroville Bakery sits within Auroville, the self-sustained colony that thrives within Pondicherry. It’s a haven for food connoisseurs and heaven for the taste buds. The cakes, the walnut brownies, and the cinnamon rolls are the most amazing I’ve ever had! The first bite and Paradise is yours. And I am in no way exaggerating. It is indeed that good!

We chanced upon Spice Route on Bussy street as a last minute risk when all other restaurants were full. Even this one was full. But luckily, thanks to the three musketeers, we got them to give us a table on the upper deck that had previously been closed. And what a wise decision to not go to Madame Shanthe’s! Every morsel of food they put on the table was heaven in itself! And four of us went back the next day, just to get that taste one last time.

Pondicherry is cozy and comfy to relax in. The people are somewhat helpful, ‘somewhat’ being because of the language barrier we had. Either way, you can spend two days or ten, and you would still wouldn’t get enough of it. At least, I remember I was too hung over from the crazy trip and I know that I’m definitely going back there again!

3 thoughts on “Travel Diaries of a Pondicherry Fanatic”